Urban planning in Barcelona, from blocks to superblocks 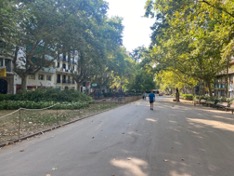 When we think of an urban setting, we might imagine a neighborhood where space is limited – properties mashed against each other, roads congested with traffic, and green space hard to come by . And while this is often the case, I can’t help but notice the dramatic variability in urban design from city to city.

Boston and New York city are two urban environments in which I have spent a great deal of time throughout my life.  And despite their proximity, their block layouts could not be more different. New York, on a grid system, is relatively easy to navigate. 56th street will come right after 55th street, and the time it takes to get from point A to point B can reliably be calculated by the number of street blocks and avenues over. On the other hand, Boston’s winding mix of one-way and narrow cobblestone roads, which were originally built for horse-drawn carriages, are not the easiest to navigate—unless you’re trying to navigate your way to Dunkin, which you’ll be guaranteed to find at least every five minutes.

And then you have other elements of the city, like nature. While green spaces do exist in both Boston and New York, they often involve a bit of seeking out to find. Central Park is big and beautiful, but in many parts of the city, you could likely walk 10 minutes or more without seeing any nature aside from pigeons. In Boston, I’ve found the layout to be similar – primarily concrete sidewalks with a single tree planted here and there, and perhaps one small public park and playground in each neighborhood. Suffice to say, the lack of comfortable – and beautiful – public spaces might explain why, for as long as I have lived in the Boston area, I have hardly ever known my neighbors. While perhaps the stereotype of the cold New Englander may be partly to blame, I have to imagine that the lack of public gathering spaces – particularly those geared towards interaction – may contribute.

In places like Boston, it’s easy to brush off the inconveniences and shortcomings of the city structure as parts of the city’s “character”. Those cobblestone roads are a part of history, so we might expect they will never change. But I’d like to challenge that notion. In Barcelona – a place filled with plenty of historical significance as well - city planners and designers are reshaping the ways in which public spaces can be shaped and used.

Superblocks – which take the concept of a grid system to the next level by grouping roads into 3x3 blocks - maximize space between roadways and buildings, creating opportunities for additional benches, playgrounds, parks, or simply open space to socialize or simply exist in public. While easier navigation may be one benefit of this structure, it is far from the only perk; researchers have suggested the restructuring of cities in this way could have wide-reaching benefits to health and well-being, from pedestrian safety to environmental air quality.

When researchers Sophia Ashebir, Lauren Cerino, Taylor Patskanick and I visited Barcelona to meet collaborators back in July, these design elements were hard to ignore.  Bustling playgrounds were as frequent throughout neighborhoods as Dunkin’s would be back home. Outdoor seating was everywhere – both in the form of strategically placed public benches, as well as tables and chairs owned by the bars and restaurants lining each block. 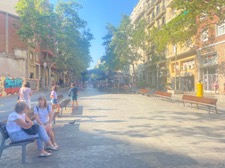 Further, despite having no gym membership, the opportunities we had to be physically active were abundant; sidewalks were comfortably wide for walking, we passed several outdoor exercise parks geared towards adults (one even beautifully placed on the waterfront of a public beach that put my Planet Fitness membership to shame), and Sophia and I even took advantage of the long, diagonal parkway through the city for a morning bike ride. It was easy to imagine the appeal of utilizing these spaces for neighbors (and tourists!) of all ages. 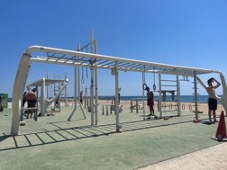 Novel designs like these raise the question of what could be possible for a neighborhood, and what connections, relationships, and healthy behaviors (both physically and socially) a neighborhood could foster – even in the middle of a historically significant urban area, and even amid a pandemic. While “neighborhood” may have myriad meanings, perhaps as more cities develop creative and exciting urban designs to promote wellbeing and togetherness, we can at least keep our imaginations open as to what a neighborhood of the future could be. 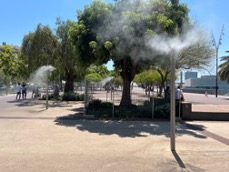