Where do we go when our work goes remote? 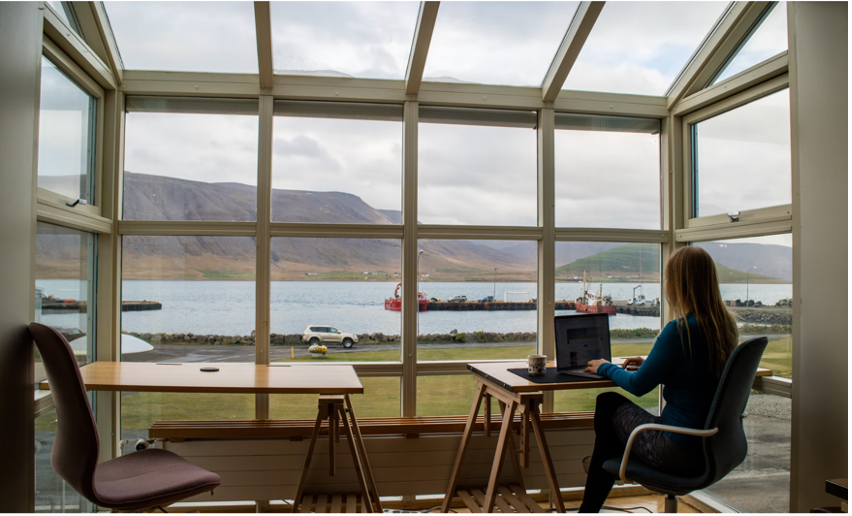 Last summer, as my roommates and I navigated the apartment-search process, proximity to our workplaces was our number-one priority. We had a lot of wants, but this was one of very few needs: three bedrooms, within a certain budget, and within a 20-minute walk to a transit station. Whenever we found an apartment that we thought we liked, we immediately estimated the time of our commute using Google Maps. As a result, we ruled out many options that checked off all of our "wants" solely because they would have made our commute too long or difficult. The apartment we ended up in is wonderful and well-situated, but we had to put a few things—like an outdoor space, an updated kitchen, and in-unit laundry—on the backburner in order to keep us reasonably close to our workplaces.

My own apartment search made me wonder about broader trends in decision-making about housing in a post-COVID working world. How might the increasing prevalence of remote work change the ways in which millions of people, for whom remote work has become the new normal, choose where to live? Taking away the burdensome question of the commute—which often amounts to being the worst part of many workers’ days—when deciding where to move opens up the possibility of prioritizing alternative considerations: saving money, being closer to family, stacking up amenities, or seeing far-off places.

Remote work is enabling some to save on living and commuting expenses. Many of my peers, for example, landed remote or hybrid jobs upon graduating from college and opted to move back in with their families. One friend has been able to fulfill the demands of his finance job from his family’s home in New Jersey, saving him from paying exorbitant rent to live close to his office in Manhattan or spending hours commuting each day. I caught up with him recently to ask how things are going, with a particular curiosity about his living arrangement. Although he looks forward to eventually moving out, he pointed out a few benefits: first, he has been able to put more money into his retirement accounts; second, when he does begin to search for apartments, he will feel more comfortable spending a little extra on rent knowing how much he has saved; and third, he can order takeout for dinner more often!

The flexibility of remote work also offers benefits for those who need – or simply wish – to be closer to family, whether young children or aging parents. Past AgeLab research, particularly results from a study titled Mapping the Caregiver Journey, has shown that caregivers frequently struggle to balance the competing responsibilities of caregiving, family life, and work. For caregivers, going in to an office for eight hours a day (or more, with commuting factored in) can be difficult to impossible. Working from home can allow them to arrange their work schedule around their caregiving responsibilities, such as providing supervision and attending doctor’s appointments. Even the roughly 105 hours saved each year on commuting can be monumental for remote workers who require some extra time to support their family members.

Post-COVID migration patterns have found many city-dwellers leaving their commute-friendly neighborhoods to live in areas that better suit them in other aspects; from better school systems to closer connections to nature to luxurious amenities to pleasant weather. Recently I visited a family member in an apartment complex situated between downtown Charleston, SC and a popular beach. I visited the complex’s outdoor pool on a weekday afternoon in hopes that I might have it to myself. To my surprise, the pool was abuzz with nearly as many people as I had seen there the Saturday before – and they were all diligently working. Many were perched in lounge chairs with computers in their laps. Some dipped their feet in the water as they churned out reports in Excel, and others paced along the edge of the pool as they took calls with clients.

As I explored more of the area over the next few days, I realized that the whole apartment complex is like a resort for these remote workers: in addition to the pool with raised beds, fans, turf with lawn games, firepits, and a grill, it offers amenities like a gym, a clubhouse, outdoor cooking spaces, catered events, dog parks, and walking trails. Most of what residents (and their pets) need is quite literally at their doorstep, and other daily necessities that the complex cannot provide, like grocery shopping, are only a short drive away. Although these perks sound like they should come with a steep price tag, I’ve seen studios in Beacon Hill going for more than what a roomy one-bedroom costs at this complex. Once again, the money that remote workers can save without having to prioritize their commute can go a long way.

Similarly, some remote workers are also choosing to use their flexibility to see and live in new places around the world without the need to settle down. The concept of the “digital nomad” is not new, but it surely took off as a result of the pandemic: in 2020, 10.9 million American workers described themselves as “digital nomads,” a 49% increase from the year before. Over forty nations across the world, many whose tourism-oriented economies struggled amidst COVID restrictions, began offering “Digital Nomad Visas” authorizing remote workers to inhabit new places for a year or two.

In addition to policy-based support for digital nomadry, entrepreneurs are building companies around the rise of remote work. Anyplace.com brands itself as “Rentals for remote workers” and offers short-term, furnished living spaces with well-equipped, work-friendly amenities (think great wifi, a comfortable desk or workstation, and a “caffeination station”). Anyplace’s website says that:

“Remote work rentals are for anyone who wants a change in their routine without using all of their vacation time. These rentals are equipped for remote workers to be on when they’re on, and off when they’re off. Many properties have access to a gym, pool, community, so any remote worker can get that R&R they are looking for.”

In other words, Anyplace seems to allow remote workers the opportunity to go on vacation while still clocking in at the job.

With all of these shifts and possibilities, I find myself wondering what other changes might be coming in the future. Migration patterns can have dramatic effects on things like the real estate market (think about those temporary drops in urban housing prices during COVID), tax revenue, and urban design. For example, Politico asks whether cities will “compete less for job makers and more for jobholders — lavishing money on schools, parks and arts rather than tax subsidies for new factories and warehouses?” Will housing developers shy away from cities to build luxurious, remote work-enabled habitations in rural areas instead?

And on a more individual level: what choice would my roommates and I have made last summer if getting to the office quickly weren’t a consideration? Although all of these options are intriguing, for the sake of simplicity, I think our next top “must-have” would have been a porch.

Lauren Cerino is a Technical Associate at the MIT AgeLab. In her role at the AgeLab, Lauren contributes to OMEGA (Opportunities for Multigenerational Exchange, Growth, and Action), an intergenerational summit and scholarship program; the PLAN (Preparing for Longevity Advisory Network) panel of financial advisors; and the C3 Connected Home Logistics Consortium. She also contributes to data management across various projects. Lauren earned her B.A. in computer science and human development from Connecticut College.