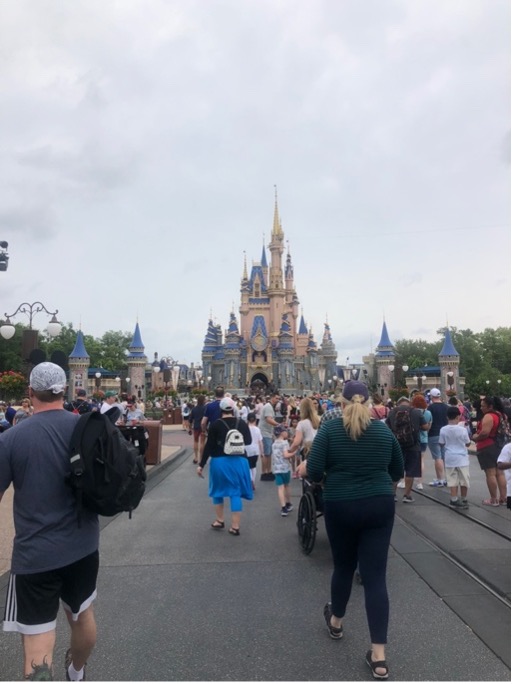 Walt Disney World. This epicenter for joy and happiness draws in millions of visitors each year. Last month, AgeLab researcher Lexi Balmuth and I walked the streets of Disney World to experience what the most magical place on earth has to offer, and to explore and consider how the theme park intersects with and meets the goals of older adult visitors. We wondered whether Disney World is physically and culturally designed for older adults to thrive and for intergenerational interactions to flourish. In this blog post, I’ll focus on the cultural side of the park, but stay tuned in a few weeks for what Lexi has to say about Disney’s built environment.

In Disney media, older adults tend to be supporting characters to a younger protagonist. So, when I went to Disney World for the first-time this past spring, I was struck by how multigenerational a space it was. I had assumed the park would be filled nearly exclusively with children and their parents, and perhaps a few “Disney Adults.” However, while walking down Main Street, USA, it was evident this was not the case. The streets were filled with couples and families, some in matching shirts, experiencing Disney World together – toddler to grandparent.

Nonetheless, despite the generational diversity of the crowd, coming to Disney World can be a siloed activity. The typical visitor will come with their party of individuals, typically a group of friends or family. They’ll have in mind some activities (or maybe even an itinerary) of what they want to do. They’ll take part in those activities and then leave. I followed the same pattern, as you’d best believe I was going to ride Space Mountain before leaving the park. Tickets are expensive and time is limited, so it is reasonable to have a plan for the day – some would say that Disney is “terrifying” without one.

There seems to be an opportunity here to imagine what Disney, or a theme park generally, could look like if we stepped away from this conventional way of interacting with the park. What if your experience did not have to be siloed into independent activities for you and your individual cohort? What if there was a way to leave space in the “schedule” to intentionally connect with others who share the same joy and interest in being at Disney World? A chance to connect with people from different generations and backgrounds. Could be fun?

On paper, this sounds great, but what would this look like in actuality? The changes could be as small as setting up tables encouraging people to sit and talk to each other while taking a cooling break. Or they could be as large-scale as creating a simulated ride experience that you would take with a randomly paired stranger. There could even be a bit more engineering involved for the latter idea, with younger and older visitors being paired together.

Disney World is a multigenerational space that brings people together to share quality time and memories, but the park has potential to go a step further and bring strangers of all generations and backgrounds together. Just some food for thought the next time you’re waiting in a 3-hour line at a theme park.

Sophia Ashebir is a Technical Associate at the MIT AgeLab. Her research interests include accessibility of public transportation for older adults, avenues to support marginalized communities, and the impacts of outdoor spaces and communities on the well-being of older adults. She earned her BA degree from Wellesley College, where she studied Economics and Comparative Race and Ethnicity.